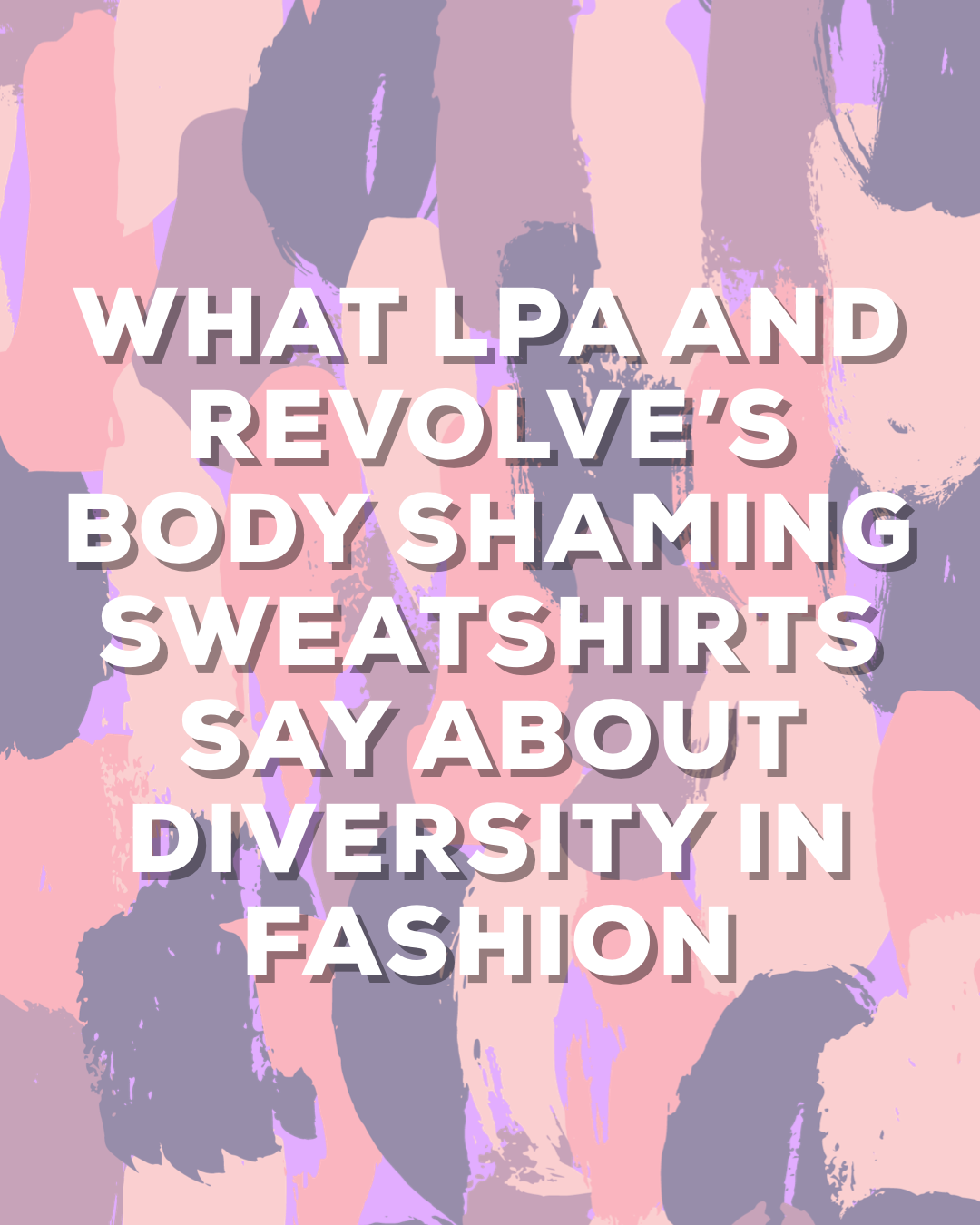 Lily: I honestly can’t believe this happened? How did Revolve put this on their site before the campaign even went out? Also good–I just got matcha at Whole Foods and no one noticed that I was wearing one of those weird zit sticker/band aids! But honestly, the fact that this would happen in 2018….

Kate: I was chilling in Dublin airport with one of those zit stickers on me yesterday! I took it off right before pre-clearance because I didn’t want to have to explain to a government official what a pimple patch is lol.

So basically Revolve jumped the gun and put the collection on their website before LPA could officially launch it. The product images that Revolve used on their website are so problematic, I’m shocked that no one working there noticed it before it went live. A thin model posing in a sweatshirt that says “Being fat is not beautiful, it’s an excuse”? That didn’t catch anyone’s eye at Revolve HQ as being blatantly fatphobic? Sounds like a workplace where diversity is lacking, to say the very least.

Lily: I read that the line was supposed to be a collaboration with 5 women (including problematic UNfave Lena Dunham) to shine a light on how bad IG trolling is. Like the sweatshirt that said “Being fat is not beautiful, it’s an excuse” had a little dash under it attributing it to a comment left on plus model Paloma Elsesser’s Instagram. The other ones say stuff like, “‘Too boney to be boned’ as said to Cara Delevingne,” “‘Horrible Result of Modern Feminism’ as said to Lena Dunham” and one about Suki Waterhouse that was like, if you put a butt on her face it would be better? But Revolve put the photos of the line out before the LPA campaign even launched!! So people were just seeing these models, wearing shirts with random shit…plus one super thin model wearing a shirt shaming fat bodies.

Kate: Yikes. Even if LPA had the best intentions with this collection, it just seems like a tone deaf and misguided attempt at empowerment. I’m all for taking back negative words and for telling trolls to fuck off but did they seriously think that anyone would want wear one of these and have to explain the context of it every time I wear it? Suki’s one makes no sense and Lena’s one is the most mild to me, shocking as that may sound, but Cara’s or Paloma’s? Hell fucking no. Also, the design is just hideous – it looks like something that you would buy from H&M instead of a $162 sweatshirt from a “cool girl” label.

Lily: Oh I don’t think I have a single friend who would willingly wear something like that? Whenever I wear this one camo jacket I have I constantly deal with men coming up to me joking “when did you serve?” it makes me wear my jacket WAY less which is a shame, because it’s cute. Now imagine wearing one of those ugly shirts that says “My face would be better as a butt” or whatever it said and having to be like, well…..I’m trying to take back the internet?

I have friends in the fat community who wear merch that says stuff like “Fat Bitch” and “Fattie” and 1. The design is actually cute (which is important!) 2. They’re reclaiming the phrase as a fat person (also important!) 3. They bought it from a place that sells XXL, XXXL, and up, so that means they are seeing models who look like them wearing the clothing WHICH IS ALSO MAJORLY IMPORTANT. People want to see people who look like they do, wearing the clothing they want to buy. Also, it can be super empowering to wear a shirt that reclaims a word someone has tried to use to hurt you in the past. If I had a shirt that said “Jewess” I would wear it constantly!!! Hell yes I’m a Jewess! Jewish goddess!!

It’s just incredibly dumb that Revolve put the line up without explanation and that LPA even came up with this terrible idea? Do you think it’s going to go back online?

Kate: I would think that given the social media backlash to the Revolve incident and the fact that LPA hasn’t issued a statement or officially addressed it on their social media platforms, they’re reconsidering the whole collection as we write this. According to Florence Given, Paloma is mortified and requested that her quote be pulled. I wouldn’t be surprised if the other women made that request too because they want to avoid additional criticism. I think that all of these women and LPA can make a better contribution to empowerment through just donating directly to the Girls Now charity that LPA said 20% of the proceeds would be benefitting. Also while we’re at it, Revolve should make a donation to Girls Now for their royal fuckup with their product photos.

Also, you need to immediately design and sell Jewess shirts. This is your empire in the making.

I also think LPA should come out with a line of sweaters that say “Sorry” in a range of sizes from XS to 4X. Or Revolve should donate to Girls Now. That would be cool too. I just think, this went past a lot of eyes….how did this happen? Who at Revolve needs to be fired? This is just another finger pointing out how desperately the fashion industry needs to be more inclusive. If a fat bodied person had been on staff ANYWHERE, I bet they would have been like hmmm…maybe don’t put a size 0 model in a sweater that says being fat isn’t beautiful. Fat women need clothing and for their bodies to be respected and the fashion industry needs fat women in it.

Kate: It’s so obvious that the fashion industry is plagued by a lack of diversity, in terms of employees, models, designers, and photographers. Clothing is a basic function of human existence and expression and for it to be a daily part of every single person’s life yet we still only see one type of body in media and ads is … just baffling. This lack of diversity that we see as an external audience is clearly a result of a lack of internal diversity. I don’t work in the fashion industry and I don’t make hiring decisions in my line of work but I try to educate myself enough to be able to call out a lack of diversity when I see it. I think the onus is everyone at LPA and Revolve to recognize when shit like this before it goes live and to make the appropriate arrangements to ensure it doesn’t happen again.

Lily: Yeah, I think we don’t need to be fat or work in the fashion industry to see that there is a serious issue with body diversity and size inclusion in that industry. It’s just wild that in 2018 we’re able to see what brands are making actual progress and what brands still just don’t get it. With social media platforms like Instagram and Twitter influencers can spread the news around more quickly that brands like Revolve and LPA are totally tone deaf or just don’t seem to care about what is actually going on. I heard about this from a friend who posted it on her Insta story like…less than an hour after it went up I think? I’m hoping that the power of the internet will lead to the downfall of dumb campaigns like this!

View all posts by thelatelyblog